Here's a page with maths related to diopters and glasses.

You don't really need to know any of this stuff to improve your eyesight, but it's good to know for deeper understanding

The image shows a typical converging lens. The three rays drawn each have an interesting characteristic:

The term object at infinity is often used. When

is substituted into the thin lens equation, that term vanishes, so that the focal length is then just the image location. For any sufficiently large object distance, the contribution from the reciprocal becomes negligible.

As the object approaches the lens, the outgoing rays converge less and less, until the object reaches the focus of the lens (

), and the transmitted light is parallel - we say it "focuses at

", which means it never comes together into a focus. (This can also be described as a virtual image at

When the object is brought even closer to the lens (

) the emerging rays are now diverging. When substituted into the equation,

. This is interpreted as a virtual image, behind the lens. This is the mode in which reading glasses (plus lenses) are used - the eye is able to focus on the virtual image which appears to be further away than the real source object.

A diverging lens behaves in a similar way, but for distant objects - the light rays incident from the source object are refracted outwards so that they are diverging even faster. Again, a virtual focus is said to form behind the lens. The thin lens equation still works as long as you use negative numbers to describe both the (virtual) image location and the focal length.

The corrective lens for myopia is a diverging lens. It works by forming a virtual image of distant objects, and it is this virtual image that the near-sighted eye is able to focus on. (You can also choose to think of it as lens in series with your eye, forming a compound lens with lower power and therefore a longer focal length.)

Intuitively, the more powerful a lens is, the more rapidly it can bring incoming light to a focus. So the power is defined as the inverse of the focal length.

How to calculate the strength of corrective lenses

The advantage of calculating the strength of differentials as a reduction from full prescription is that you don't have to worry about the cylinder element - just preserve that part.

Assuming you are wearing your full 20/20 correction (or even if you are fortunate to be emmetropic), the eye wants to receive parallel incident light to be relaxed. So we can use a simple geometric argument to calculate the strength of the (converging) lens which should be interposed : an object placed at the focus of a converging lens will result in parallel outgoing light ("focus at infinity"). This parallel light is exactly what the (fully corrected) eye wants to receive.

But rather than actually placing such a lens in front of your full prescription, simply add that value (being careful with signs).

ie if your screen is 50cm away, that corresponds to a power of

. So that's the value you'd add to your full prescription (resulting in a less-negative lens).

From blur horizon of naked eye

Note that this does not take either cylinder (astigmatism) or vertex distance into account.

Your cm measurement gives you the distance the eye can see when it is fully relaxed. You want a (diverging) corrective lens which puts a virtual image of the source object there. So we can solve the thin lens equation to find

for an arbitrary source object distance

For differentials to use a screen at, say, 50cm, just use

. (Which is consistent with the previous version, adding 2D to the calculated full correction of -5D.) 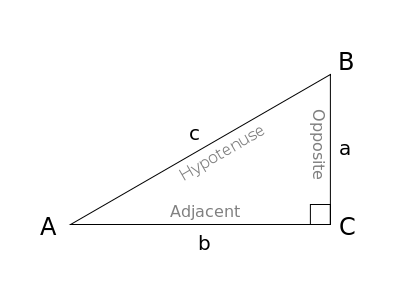 A reminder about some trigonometry / geometry

An alternative representation of acuity is "logMAR" ("log10 Minimum Angle of Resolution"). This has a bigger-is-worse direction.

On a Snellen chart the letters are defined on a 5x5 grid: the detail to be resolved to distinguish between characters is one pixel of that grid. Here 'b' is the distance to the chart (eg 6m) and 'a' is the height of the letters. It's not critical that the eye is at the bottom or top of a row of letters - as long as the angles remain small, the numerical error is insignificant.

The denominator can be interpreted as the distance at which the letters subtend 5 minutes of arc.

If someone with typical eyes wanted to adapt say 20/20 to .25 less normalized within 3-4 months would need to decrease axial length 0.083mm about 0.92microns/day - 0.69microns/day average Credit: Mark Podowski

Converting from Glasses to Contact Lens Prescription or vice-versa