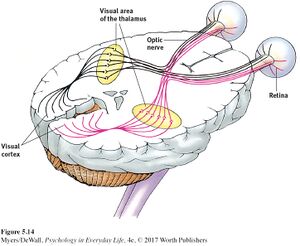 Mindful viewing is another way of capturing the concept of active focus, which is the cornerstone of EndMyopia movement that helps to reverse myopia. We recommend you read the previous articles on how chronic spectacle use in close up work not only deteriorates vision, but makes reversal harder than it needs to be. Mindfulness is a concept where one engages in an activity consciously as opposed to passively/automatically. Think of the time you learned to ride a bike or you were learning a new math concept for the first time. The initial time, you were fully concentrated on the activity, and you probably made too many errors. With time, these errors were "learned" and the process became automatic. Given the same math problem, you no longer had to sit and think for five minutes on how to approach the problem rather you just went and executed the steps. This kind of automatic or subconscious behaviour is the end result of learning. However, in the context of myopia, the case is not so different. Prolonged stimulus that involves sitting in front of the computer or a book acclimate the brain to viewing in an automatic way rather than engaging mindfully to the visual stimulus. Mindfully switching to a state where you take mental notes of everything you view is the working method.

The Visual Thalamus and Visual Cortex

Neuroscience has determined that the way the retinas connect to the visual cortex is through the thalamus. The visual cortex is a structure which is 1/3 the size of the brain and responsible for all visual processing and learning. It is in the thalamus, that neural activity gives rise to a consciousness of sight. During the early infant years, the infant learns to recognize faces. What they are doing is basically embedding neural patterns that correspond to facial features and their contrast with the environment around them. This is the learning process of the sight and it all happens in the visual cortex. Once patterns are established in the visual cortex, the infant can readily recognize their mother the next time they see her as opposed to a stranger who hasn't made a stronger impression. The retinas send signals to the thalamus and as you might expect, this is a very high throughput of information. The visual cortex however feeds back 6 times as much information back to the thalamus. Doing so, the thalamus is the centre for comparison of what is input(retina) vs what is the expectation(visual cortex). Only the differences are caught, and this allows humans to have very good, responsive sight. During automatic or passive staring, the information flow from the visual cortex takes more precedence than input from retinas, resulting in passive viewing which is also unconscious or low conscious effort viewing. This is also the reason behind why color illusions exist, it is because our visual cortices overpower sight with its expectation of what it wants to see. Even though retinas are seeing correct color, it is overridden by the VC. Another instance is when we are running, our heads keep bobbing up and down and yet, the world appears static. This is again the magic of the visual cortex which works to "stabilize" the visual fields and eliminate all the jittery input from the retinas. If you could be consciously viewing all the time, it would be inefficient. The tradeoff for fast viewing is unconsciousness. Most of viewing is involuntary.

The working theory is quite straightforward: Become super conscious of what you are looking at and make the process conscious rather than automatic. When you are looking at something with a lot of detail, ask mental questions, take mental notes, do eye patching and repeat the same. For example: take a bedsheet with a lot of detail, pay attention to each detail, take a look at it, then ask yourself questions about how many objects did you see etc. and then compare that with your visual field too see if you were conscious of that information. Think about what you're seeing reminds you of, build thought chains linking to visual information right in front of you. The philosophy is to learn to see again, like learning to ride a bike again. Observing the nuances, the little details and the act of summoning that detail from your eyes help give it positive feedback and signals that help improve the focus without you requiring to squint or stress your eye muscles. Doing this often, you must convince yourself into a habit of introducing awareness into everything you see. The more you stimulate your eyes, the better they respond.